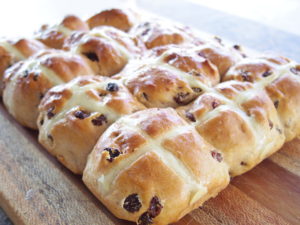 What would Easter be without melt-in-your-mouth Hot Cross Buns. Nothing beats the aroma these bring to Easter; not to mention the hint of spice of a buttery, toasted bun. Why not let the smell of Easter fill your home, by baking your own Hot Cross Buns?

Sieve the flour, salt and mixed spice into a mixing bowl, before rubbing the butter in with your fingertips. Next, create a well in the centre and add the sugar, zest and yeast in.

Beat the egg, before adding the flour mixture and tepid milk and mix it into a soft dough.

Lightly flour your work surface and turn out the dough, working the mixed fruit in gently until it’s well combined. Knead it lightly for around 5 minutes – it should now be smooth and elastic.

Setting it aside for a moment, grease a large mixing bowl with the extra butter you have. TIP: It helps to warm the bowl up. Shape the dough into a ball, place it into the bowl and cover with a tea towel. It’s best to put it

Shape the dough into a ball, place it into the bowl and cover with a tea towel. It’s best to put it in the warmest spot you have and leave it to rise.

Once ready, turn the dough out onto a lightly floured surface and knock it back. Shape it into  a ball again, return to the bowl, cover and let it rise for an additional 30 minutes.

Turn the dough out and divide it into 12 equal pieces. Roll each piece into a ball between the palms of your hands and flatten them slightly. Cover then buns again with the tea towel and set aside to rest for 10 minutes.

Grease your baking tray with butter, move the buns onto the tray and loosely cover with greaseproof paper before putting them in a large freezer bag and tying the end shut. It important that no air can get in. Move them into a warm place and rest for 40 minutes.

Start preparing the topping by mixing the flour into a paste with the water. Spoon the paste into a piping bag.

When the buns are ready, remove the tray from the bag and greaseproof paper and pipe a cross on each bun. Slide them into the oven and bake for aroun 12 minutes. TIP: They should be a pale golden brown.

Remove them from the oven and immediately glaze with hot golden syrup, before you set them aside to cool.