We’ve all been laughed at when calling the traffic lights robots. The terminology tends to give the impression that the level of technology in South Africa peaks at lights turning green. But let’s look at what The Real Reason South Africans Call Traffic Lights “Robots”.

Traffic lights are actually called robots in many countries and not just South Africa only. The automatic function of the traffic light resembles that of a robotic machine and hence the name.

They actually say before traffic lights were there in South Africa, the police used to control traffic with their hands in busy intersections as they still do at times. When the traffic controllers (the police) were replaced it sort of created an impression that a human job was replaced with a machine and hence the name robot. The original term was “robotic traffic controller“.

When the traffic controllers (the police) were replaced it sort of created an impression that a human job was replaced with a machine and hence the name robot.

“Nice tekkies, Bru” is something that would leave you wondering ‘what the heck are they talking about?’. Well, this is the South African slang phrase for trainers / sneakers.

It’s been speculated that they’re called this because before World War 2 tennis shoes were imported into South Africa from Japan. They were very badly made and fell apart in no time and soon became known as tackies among the then fairly large Scottish community.

We’ll never know the full truth, but one thing is known: bunny chow will live on as a Durban icon. 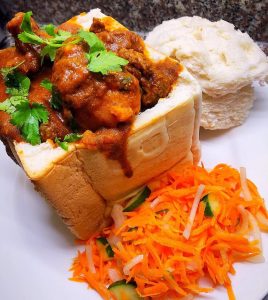 ‘I could not believe it, hey’ and ‘shame’

Ever noticed how we put ‘hey’ at the end of almost every sentence? ‘I could not believe it hey’ or ‘what’s cooking on the braai hey?’ It doesn’t matter if it’s a question or a statement. It’s just weird hey! The other word is ‘shame’. We like to use this in good terms and in bad terms. Didn’t pass your exam? ‘ag shame!’ Looking at a cute puppy? ‘ah shame’. I’m not sure we understand the meaning of the actual word.

I bet you feel a whole lot more South African now, don’t you?